This weekend the Dudes were in Bedfordshire and Suffolk. Both of our gigs were early starts which meant on Saturday we would finish in time to watch the England game – does anyone know who won?!

Our first port of call was a 40th wedding anniversary in Bedfordshire for the lovely Colin and Linda.

We were performing in a Marquee that resembled the set of Alice In Wonderland. Also in the tent were about 50 guests – no Mad Hatters though - none of whom had a clue what they were about to listen to. You never quite know how the show will go with a virgin audience, but we needn’t have worried. We hit the ground running - or rather the grass!! From the opening number of Come Fly With Me the audience were lapping it up. They were really up for a good time and especially enjoyed the interactive bits of the show. By the end they were shouting for more and we had several requests for further bookings. Someone even wanted to know if we would go as far as Sorrento in Italy? Is the Pope a Catholic?  Which one, you may ask?!

Sometimes on tour, we have to make do with rather difficult conditions – changing in the disabled loo or warming up in the gents. Not in Bedfordshire though. Our green room was a fabulous log cabin that even had its own bathroom, lounge, bedroom - oh and did I mention the Sauna? It’s a hard life but someone has to do it.

After staying up to watch the football in our lovely Holiday Inn Express (they blogged, hoping for some handy sponsorship) we were up, fed and showered and ready to get off to our next gig in Freckenham for Creative Arts East, even  if it was with a heavy heart, having been beaten by the Italians at football. We decided to make a little detour on our way to Freckenham, and so headed for Bedford Town centre to sample the local delights. We couldn’t find any, so we settled for Costa Coffee (more sponsorship) instead – sorry Bedford!!

Armed with M&S sandwiches – it’s all about product placement, you know - we then made for the cultural centre of the world - Freckenham  (well, at least it was for Saturday night). Freckenham is a lovely village just inside the Suffolk border. The Church was a beautiful flint church, some of it dating back to the 13th century complete with carvings of devils and sinners being fed to the mouth of Hell. They’ve obviously had worse than the Opera Dudes in the past! The church also had the most wonderful acoustic and fabulous wooden ceiling - well worth a visit. 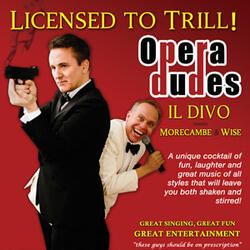 We were greeted by our hosts, the delightful Jane and Cecilia – the latter turned out to be not only our host but also tour guide and coffee and tea maker! She is a lovely lady who obviously has a passion for the village and the Church. We were also introduced to the Eco-loo that itself had a strange resemblance to the mouth of Hell! It also had a magnetic lock on the door that could only be opened from the inside. Now that could have caused a situation and it certainly formed a very significant part of Jane’s introductory remarks to the audience! You can’t beat rural touring!

Our show for this evening was Licensed to Trill and trill we did for the next hour and forty minutes. The church was packed – over 100 in the aisles and it was another triumph for the Dudes. The response was almost immediate and soon people were laughing and cheering in equal measure. Comments like ‘it was the best evening I’ve had for years!’ and ‘I can't remember the last time that I laughed so much on a Sunday night’ really make it worthwhile and I don’t think Olive will forget Neil in a hurry! In fact we have been completely overwhelmed by the response. Freckenham is obviously a very happening place as we have had lots of tweets and Facebook comments on the Dudes’ Facebook page saying how much people had enjoyed it and how uplifting it was. Thanks Freckenham for being such a great audience!

Some of the comments from the audience:

"One of the best evenings for ages.......absolute quality, just listening to the CD right now."

"A joy and delight from beginning to end, an evening of (almost) infinite variety of music genres, all delivered with style, polish and panache. Another triumph for Freckenham, take a well-deserved bow."