It has been a while since we have done a Magdala opera start workshop, but that workshop ball is about to roll again very soon. In the autumn we start the second year of our Youth Music Young Leadership programme, running workshops with schools and communities in Sutton-in-Ashfield as well as another program with schools and care homes in Radford in Nottingham. The main focus of the first project is to offer training to young teenage mentors who want to develop their skills helping to run workshops in the community.

First job is to find suitable - and suitably willing - candidates, so, on the 16th of July last week, we ran our first young leaders' taster session at Quarrydale School in Sutton in Ashfield.

We had a group of twelve Year 9 students, all of whom looked very nervous when we arrived and seemed reluctant to prize themselves away from the security of their chairs! Of course it is a scary situation for them - they don't know us and they have no idea what we are going to do with them, so breaking the ice is very important. Tim and I clearly had a task on our hands - maybe a case of "pulling teeth"? Like benign dentists - if such a breed exists - we prepared them and then carefully applied the pressure. There was a bit of wriggling and quite a lot of gasping but, bit by bit, we managed to extract, if not a tooth, then at least some positive response out of them . Yes, they actually started to enjoy the session; first a giggle, then a laugh, then even some uncontrollable laughter as they really could not believe what they were doing! Being silly!! 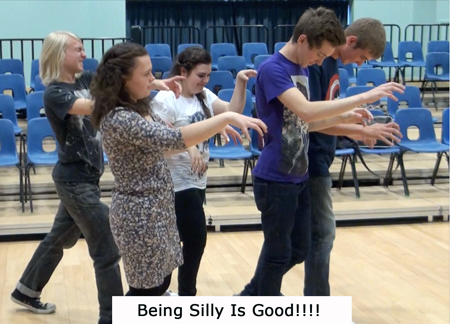 The most challenging part of the morning was to get them engaged in singing. They were clearly happier in group activities than being put on the spot and, to begin with, singing wasnt't even happening in a group! We tried everything we could to get them to make a sound - any kind of sound. It didn't have to be in tune, it didn't have to make sense, it just needed to be loud enough to be heard by another human being!

The taster session lasted for about 3 hours of intense non-stop action and we did eventually get them singing. However it is surprising how the prospect of singing can paralyse a human being and often seems to be the scariest thing for people.
At the end of the session we asked if any of the group would like to try the full leaders course and all but one put their hands up. That was definitely a surprise; it just goes to show you can never judge a book by its cover - or a tooth by its enamel?!

Anyway, this presented us with another problem! We only have room for 5 pupils and we had 11 interested. Watch this space for more updates!! its going to be a busy Autumn.......